Anuradhapura is listed as one of the country’s eight UNESCO World Heritage Sites, which is hardly surprising. The city is considered to be among the oldest, continuously inhabited, cities on the planet. Archaeological findings trace its origins all the way back to the 10th century BCE.

It Was A Proud Ancient Capital

Today, Anuradhapura is one of Sri Lanka’s major cities in the North Central Province. In the distant past, it was an even more important city on the island. Anuradhapura enjoyed the honour of being the capital of the Kingdom of Rajarata. In fact, the city is believed to have served as a capital between the 4th century BCE and the 11th century CE.

One of the main Anuradhapura attractions is an ancient fig tree. It’s known as the Jaya Sri Maha Bodhi. This tree is said to be related to the legendary fig tree of Buddha Gaya in India.

It Has Two Ingeniously Designed Ponds

Located within the gardens of the Abhayagiri Monastery are the 1,500-year-old Twin Ponds or Kuttam Pokuna. The irrigation system in place for the ponds is quite progressive. It’s often touted to be among the most advanced examples of hydraulic engineering that existed at the time.

King Aggabodhi commissioned the construction of these bathing pools in the 6th century CE for the monastery’s monks. The two ponds measure approximately 130 feet and 90 feet in length, and are fashioned from stone.

It Possesses An Ancient Moonstone

Also resident at the Abhayagiri Monastery is the Sandakada Pahana, an ancient moonstone whittled from stone. Just what is a moonstone you ask? It’s a slab of stone which is cut into the shape of a semi-circle and bears intricate carvings. Moonstones are generally placed at the entrance of Buddhist temples. This particular one dates all the way back to the 1st century BCE.

Take a close-up look the lotus blossom depicted in the centre. Surrounding it are many tiers of animals that are carved onto its face. Each of these creatures symbolises a different worldly concept such as birth, ageing disease and death. The lotus, on the other hand, represents Nirvana. And so, the moonstone is believed to symbolise the overcoming of karma, temptations and the cycle of life and death. In Buddhism, this signifies the path to enlightenment.

Interested in the city and its many historical wonders? Make time in your itinerary to spend a few days there. Anuradhapura accommodation is easy to find and stay in town doesn’t have to cost much. If you’re trying to stick to a humble budget, check out these guest houses in Anuradhapura. They provide all the necessities that form part of the Yoho Promise. Namely, things like WiFi, AC, TV and breakfast.

While you’re there, you can also visit other cities that form part of the Cultural Triangle. 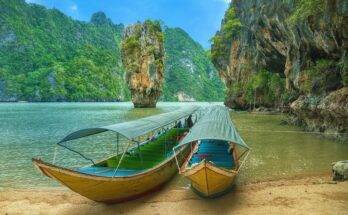 Must-See Places in Thailand Everyone Should Explore